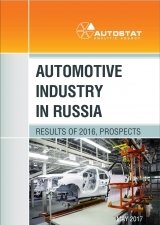 You are reading our traditional report "Automotive industry in Russia. Results of 2016, Prospects", prepared by AUTOSTAT analytic agency and containing information on automotive vehicle production in Russia, particularly passenger cars and commercial vehicles. Besides cumulative data and analysis of the trends in the Russian automotive industry, this report comprises information on each enterprise including last year’s results and production dynamics for the few recent years as well as actual information about the current activity and prospects of development. AUTOSTAT specialists have also prepared a forecast of vehicle production in Russia in 2017.

1.31 million vehicles were produced in Russia in 2016, that is 5.4% less than a year ago. So the Russian automotive production has been decreasing for four years in succession, however the decline rates slowed down considerably. At the same time, 68,000 passenger cars (-30.2%) and 14,300 trucks (-28.5%) were exported. About 85% of automotive production in Russia is generated by passenger cars that are 1.12 million vehicles (-7.9%). The share of foreign manufacturers decreased a little to 76.5% last year. So the share of domestic brands came up to 23.5%. AVTOVAZ remains the leader of the Russian automotive industry, having assembled 255,537 passenger cars last year – that is 26.3% less than a year ago. The largest foreign vehicle manufacturer Hyundai Motor Manufacturing Rus plant in St. Petersburg assembled 207,000 passenger cars last year that are 9.8% less than in 2015.

Marketing report "Automotive industry in Russia. Results of 2016, Prospects" is prepared with an office research method. The major information sources are our own databases and information obtained from the market players directly. All data, presented in the report is clearly organized and compiled in tables. Each subject is traditionally illustrated with graphs and diagrams.

Save this product for later