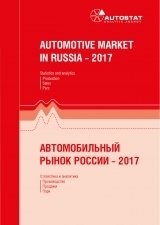 You are reading the fifteenth edition of our annual reference book "Automotive market in Russia", covering results of 2016. It traditionally contains statistics and analytics on production, sales and vehicle parc in our country.

Last year the sales of commercial vehicles (LCV, trucks, buses) came up to 156,454 vehicles, that is 2.6% more than a year ago. The demand for the new passenger cars decreased by 12.1% to 1.31 million vehicles. The continuing decline in the car sales affected vehicle production in Russia. 1.31 million vehicles were produced in our country in 2016, that is 5.4% less than a year ago.
The positive changes in the Russian economy, give ground for the conclusion that the Russian passenger car market has reached the bottom and the crisis is close to its end. The significant pent-up demand and the coming vehicle replacement time, coupled with measures of state support, such as preferential loan and leasing programs, which is especially relevant for commercial vehicles, the parc renewal program, which is necessary in the situation of the general aging of the domestic fleet, and subsidizing of some cost of gas engine equipment, etc. can support the market, which will facilitate production.
Besides the main segments of the automotive parc in Russia (passenger cars, LCV, trucks and buses) the report also contains data by production years in the brand structure as well. In 2016 automotive parc in Russia increased by 1.7% or more than 800,000 vehicles and exceeded 49 million vehicles. The lion’s share (almost 84%) of the parc is generated by passenger cars (41.6 million vehicles). During the year their number increased by 1.8%. Light commercial vehicles form 8% of the total parc or almost 4 million vehicles. Last year LCV parc increased by almost 1%. Trucks generate 7.5% of the parc. There are 3.7 million trucks, during the year their number grew by 0.5%. Less than 1% of the parc belongs to buses, that is about 400,000 vehicles in terms of numbers.
Save this product for later