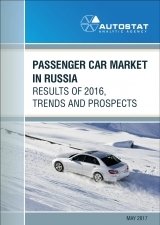 Passenger Car Market in Russia. Results of 2016, Trends and Prospects

Summing up results of the previous year, we are happy to offer you the new installment of marketing report on the Russian passenger car market, prepared by experts of AUTOSTAT analytic agency.
The report “Passenger Car Market in Russia. Results of 2016, Trends and Prospects” contains detailed information on the last year’s passenger car sales, their dynamics and structure, market capacity, its price parameters, segmentation, etc. Results of passenger car sales in Europe, dynamics and structure of passenger car import to Russia as well as information on the market leaders by classes are included as separate pages.
Moreover, we paid special attention to trends and prospects of passenger car market in the forecast of the automotive market development in short term prospects. Each market player’s sales results – dynamics for recent years, model structure, and monthly sales – are represented in the report visually.
In 2016 new passenger car sales in Russia came up to 1.3 million vehicles, which is 12.1% less than a year ago. Having decreased its sales by 1.4% – which is much less than on average in the market – LADA remains an absolute market leader. Its result was 258,008 vehicles vs. 149,567 KIA (-8.5%) and 144,050 Hyundai (-10.3%) vehicles sold. During the year, companies imported 234,100 passenger cars, that is 22% less than a year ago. The leaders here are Toyota, Lexus and Mercedes-Benz, which generate almost 55% of the import together. We should also mention that the share of used cars in the import grew three times up to 6.7%. as compared to 2015. According to AUTOSTAT estimation, in 2016 the average price of a passenger car in the Russian market came up to 1.37 million roubles, that is almost 172,000 roubles or 14.4% more than a year ago.
Save this product for later